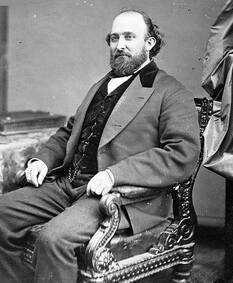 The Society was first known as the Illinois Democratic Club of Washington, DC. During Abraham Lincoln’s presidency, it became the Illinois Republican Club, and its name continued to change whenever a new political party came into power. Then, in the 1890s, it became permanently known as the Illinois State Society of Washington, DC. The Society was incorporated as a non-profit organization in the District of Columbia in 1954 and is a founding member of the National Conference of State Societies. The Society continues to grow and has had as many as 3,500 members in recent years. It is considered to be the oldest state society. 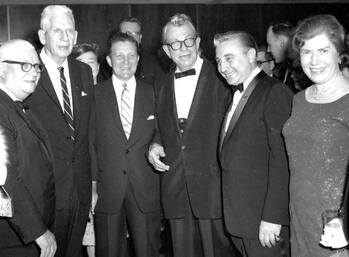 Cong. John Fary, Sen. Paul Douglas, Gov. Otto Kerner, Sen. Everett Dirksen, Cong. Roman Pucinski, Former ISS President Helen Lewis of Macomb at 1966 Illinois State Society Dinner in DC.
The Illinois State Society Intern Scholarship Program was initiated in 2002 by past Society Presidents Jeanne G. Jacob and P. Scott Shearer. Formally approved by the ILSS Board, the Program’s goal was to assist students from Illinois in off-setting the cost of a summer internship in the offices of the Illinois Delegation on Capitol Hill in Washington, DC. The Society believes that this opportunity should not just be for the wealthy.
​
ILSS Intern Scholarships are awarded based on academic record, recommendations from the Members of Congress or senior Congressional staff, personal statements, extracurricular activities, and financial need. In current years, the Society has granted approximately $20,000 per year in scholarships. Three awards were granted in the initial program year (2002); five in 2003; 15 in 2004; 16 each year in 2005, 2006, and 2007; 20 in 2008; 27 in 2009; 32 in 2010; 30 in 2011; 36 in 2012; 38 in 2013; and 30 in 2014. 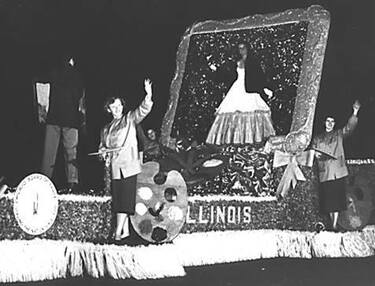 Illinois State Society Float 1954
To raise money for the Intern Scholarship Program, the Society holds Presidential Inaugural Galas every four years. The first Illinois State Society Inaugural Reception took place in 1969. The event, honoring the late Sen. Everett M. Dirksen, was held at the Gramarcy Inn before an overflowing crowd. Mrs. Dirksen was later honored, and the proceeds given to the Dirksen Library in Pekin, Illinois. The 1973 and 1977 Inaugural Receptions were held at the Capitol Hilton, then known as the Statler Hotel, and subsequent receptions were held at the International Club in 1981 (under the Presidency of Nancy Krakover) and the National Press Club in 1985 (under Presidency of Mary Fran Coffey). 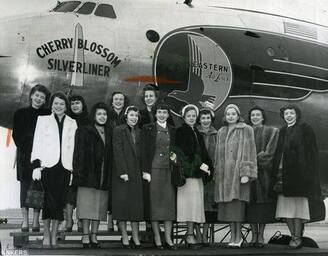 Barbara Joan Freeman, second from left, was the ILSS Cherry Blossom Princess for 1950 to represent Illinois in the National Cherry Blossom Festival
In 1989, under the direction of ILSS President Jeanne Jacob and Treasurer Peter Andriole, the Society’s Board decided to expand its efforts and began holding Inaugural Balls that were officially sanctioned by the Presidential Inaugural Committee (PIC). These balls were held at the Grand Hyatt Washington in 1989, 1993, 1997, 2001, and 2005 with up to 3500 in attendance. In 2009, the Gala was moved to the Renaissance Hotel to accommodate more attendees as the Society honored the fourth US President to come from Illinois, The Hon. Barack Obama, and more than 7,000 were in attendance to celebrate both the President and Illinois. In 2013, the Inaugural Gala again was held at the Renaissance Hotel with approximately 2,200 attending.